why did we use LED Lighting products?

What does LED stand for? Light Emitting Diodes.

Where are LED lights being used? Since LED lights are so energy-efficient, the most common applications are places where lights are switched on for an extended period of time. You can find LED lights in restaurants, offices, parking lots, streetlights, dorm rooms, ice skating rinks and, of course, in homes. You can see some places that have installed LED lights here.

Can LED lighting really save energy and money? Take a look at the statistics. The specialist estimates that widespread adoption of LED lighting by 2020 will:

Reduce electricity demands from lighting by 62 percent.
Eliminate 774 million metric tons of carbon emissions.
Reduce the amount of materials being put into landfills.
Avoid the building of 390 new power plants.
Save the US over $840 billion. (for China) 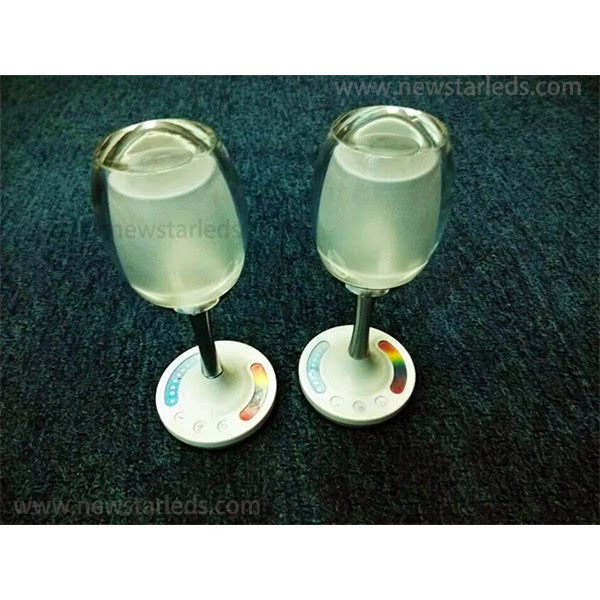 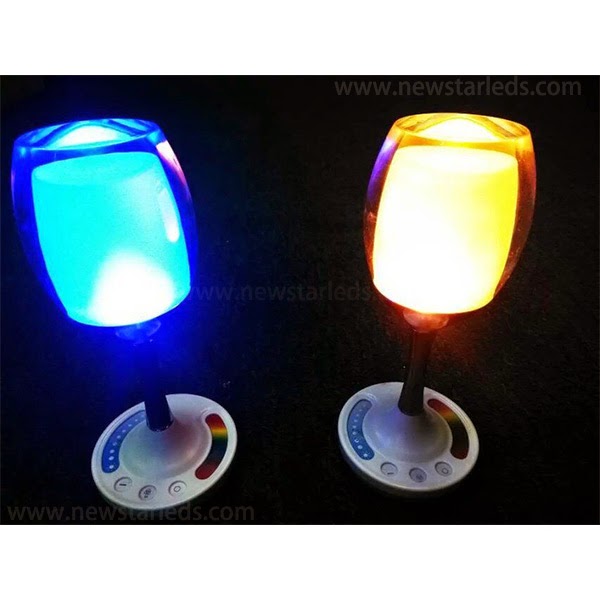 LED lighting is about 85 percent more efficient than incandescent bulbs. Since LEDs consume significant less energy, they don’t emit as much heat. That’s why you typically won’t burn yourself if you try to touch an LED light once it’s turned on.*

Why is LED lighting better than fluorescent lighting and CFLs? LEDs don’t contain hazardous materials, such as mercury. Since fluorescent tubes and CFLs contain mercury, they must be properly disposed of in order to prevent mercury from poisoning landfills. Here are some tips from the U.S. Environmental Protection Agency on how to dispose of fluorescent lights.

Also, most fluorescent lights cannot be dimmed and many can flicker. Some people are sensitive to this flicker and experience headaches, migraines and eye strain. LED lighting uses solid-state technology, which allows effective dimming in many applications and eliminates flickering.

Fluorescent lights can also take several minutes to achieve full brightness and even longer in cold environments. LED lights are also instant-on and can withstand extremely cold conditions – such as those in freezer cases or on the streets of Alaska.

And, high quality LEDs produce better light that shows color more effectively than fluorescents. (More on that below).

The ability to make colors look true – that is to have a tomato look like a tomato – is called color rendering. The color rendering index (CRI) characterizes light sources in view of their ability to produce “natural light” and can be between 0 and 100. The closer an LED light comes to 100 on the color rendering index (CRI), the more naturally colors are rendered, and the light is perceived as more pleasant. The CRI of fluorescent tubes is often around 75. NEWSTAR LED lighting fixtures could provide 80-95 CRI.

How long can LED lights last? With the right design, LED lights can have a lifetime of 50,000 hours and more in continuous operation. Depending on how many hours-a-day they are operating, that can be from 6 to 7 years to as many as 20 to 30.

Unlike other lighting technologies LEDs do not completely fail—they grow dimmer. At the 50,000 hour mark, Cree’s LED lights are designed to provide at least 70 percent of their initial light output. Many different factors (such as fixture design and operating conditions like temperature and current) determine the actual lifetime of an LED.

Aren’t LED lights too expensive? A main challenge with LED lighting is that it costs more upfront, but really, it’s no different than requiring insulation in homes and buildings. It can pay for itself over time with energy savings and lower maintenance costs. Keep this in mind when you initially invest in LED lights.

Besides, how do you define expensive? Is it purely the up-front cost of a light or do you factor in the cost of the energy to run that light and, if you’re a business or government, the cost to change the lightbulb? And if you’re building a new building, installing LED lighting is often just about the same cost as traditional technology—and you’ll start saving money, through reduced energy consumption, the minute you flip the switch.

How can I join the revolution? You can start by pledging to learn more. You can also spread the good word. Tell your peeps. Heck, tell your boss. Maybe she’ll see the light and nix the dim bulbs in the break room. Bad lighting habits can’t be broken if no one understands the alternatives. And if you need more information, don’t hesitate to contact NEWSTAR LED. After all, we’re Lighting the LED Revolution.

how to match code, remove code?

NEWSTAR LED CO., LIMITED is a professional factory for all kinds of RGBW led light, if you've known how to use wifi led bulb,so now you need to know how to complete the match code, remove code, so that you could control our RGBW LED bulb separately or simultaneously.

1, match code
First Step: Power outages for the RGBW LED bulb 10s.
Second Step: power on the RGBW led bulb, immediately press the any one of the red circles after lighted (This operation is valid for the lighting of three seconds), then the bulb could be flash slowly 3 times, means that the group which you operated code matching success. No flashing lights;

2. remove code
First Step: Power outages for the RGBW LED bulb 10s.
Second Step：power on the RGBW led bulb, immediately press the button which can control the bulb after lighted (This operation is valid for the lighting of three seconds), then the bulb could be flash quickly 9 times, means that code removing is successful. No flashing lights;

3. Remove all code：
First Step: Power outages for the RGBW LED bulb 10s.
Second Step：power on the RGBW led bulb, immediately press the blue button which can control the bulb after lighted (This operation is valid for the lighting of three seconds), then the bulb could be flash quickly 9 times, means that code removing is successful. No flashing lights;

if you have any doubts for how to control our RGBW LED Bulb, pls contact us: info@newstarleds.com, we've give you a hand at once. 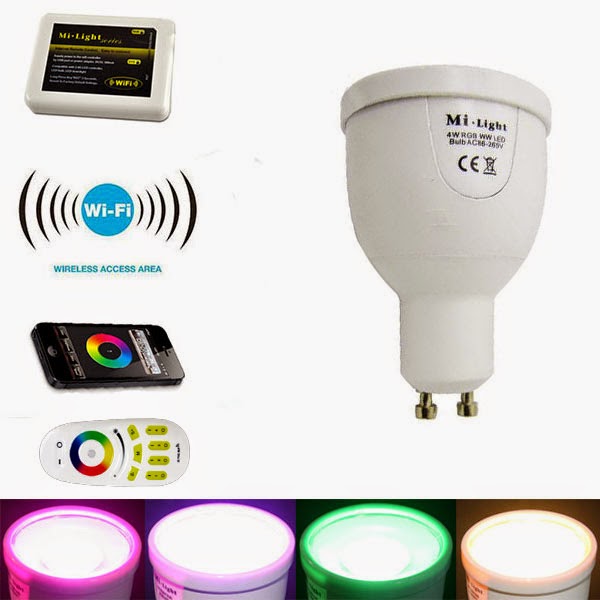 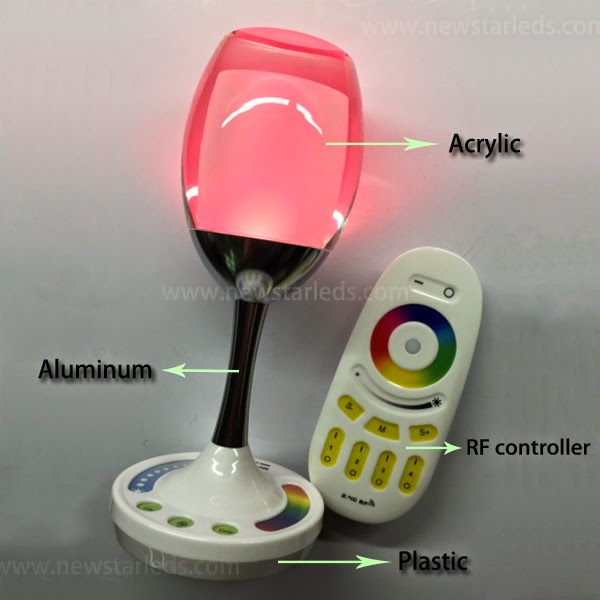 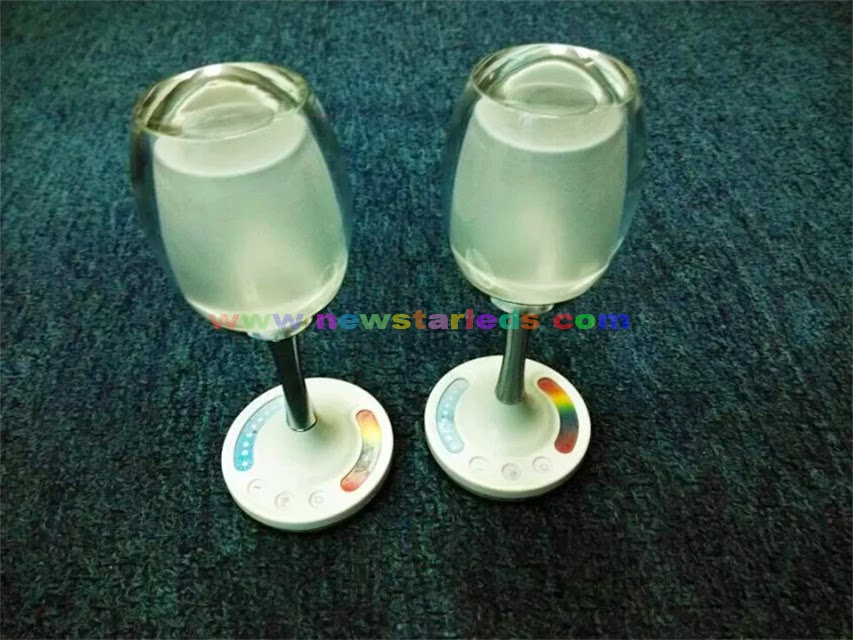 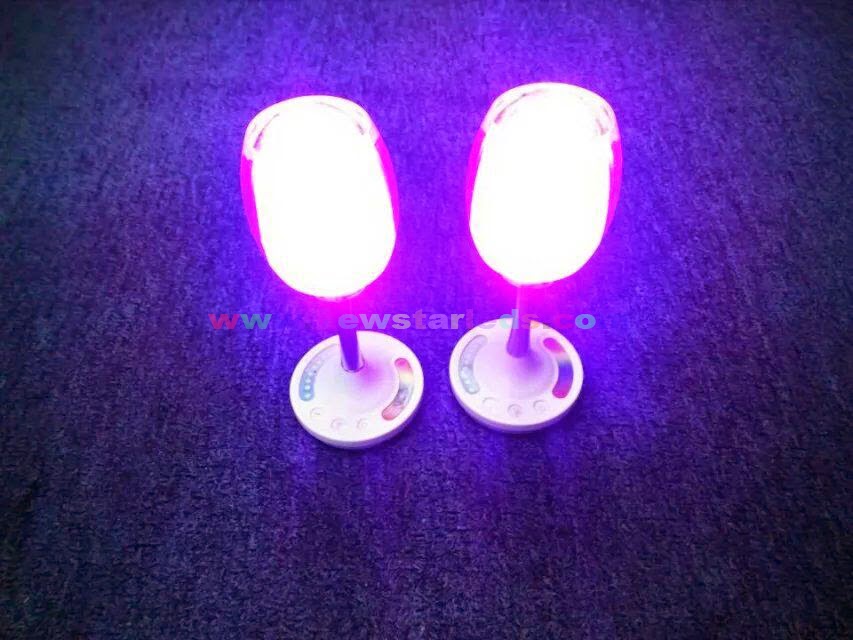 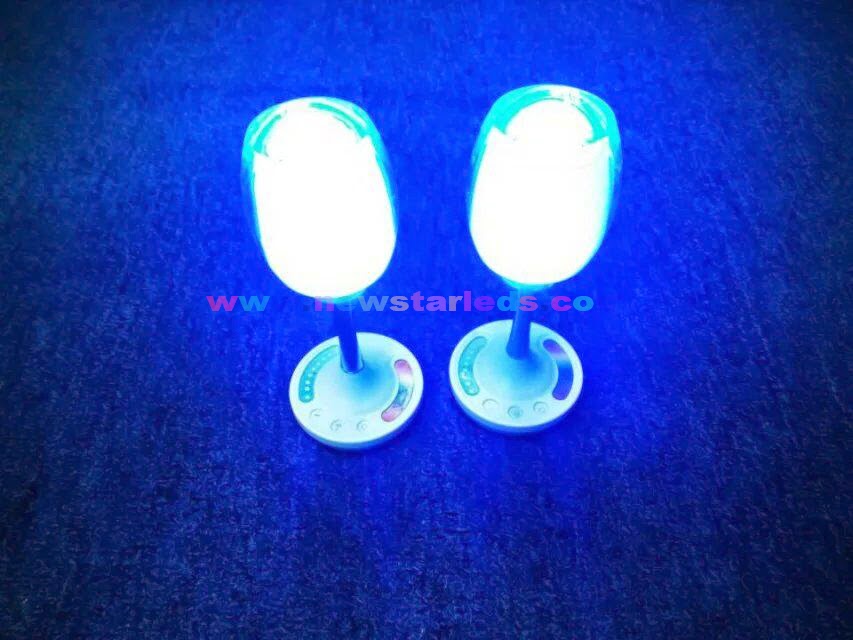 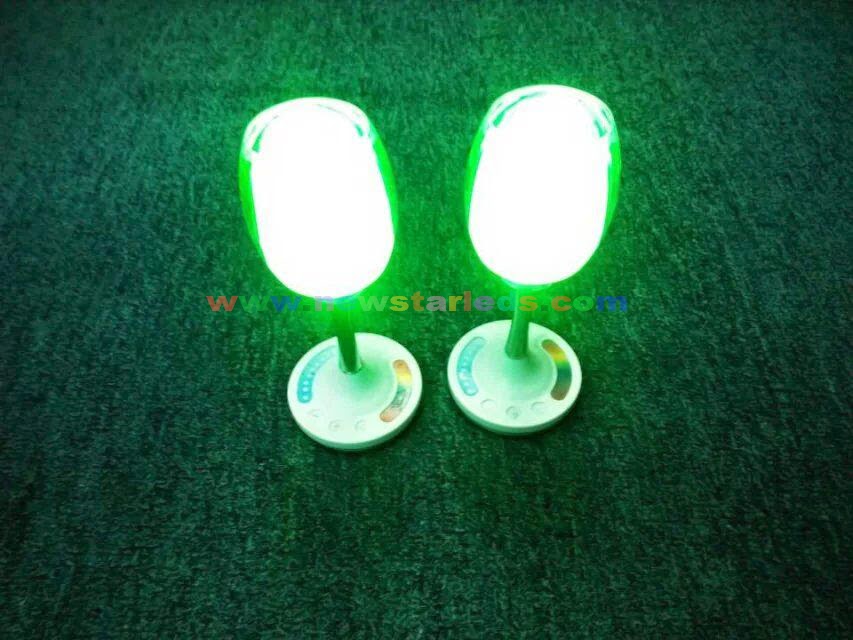 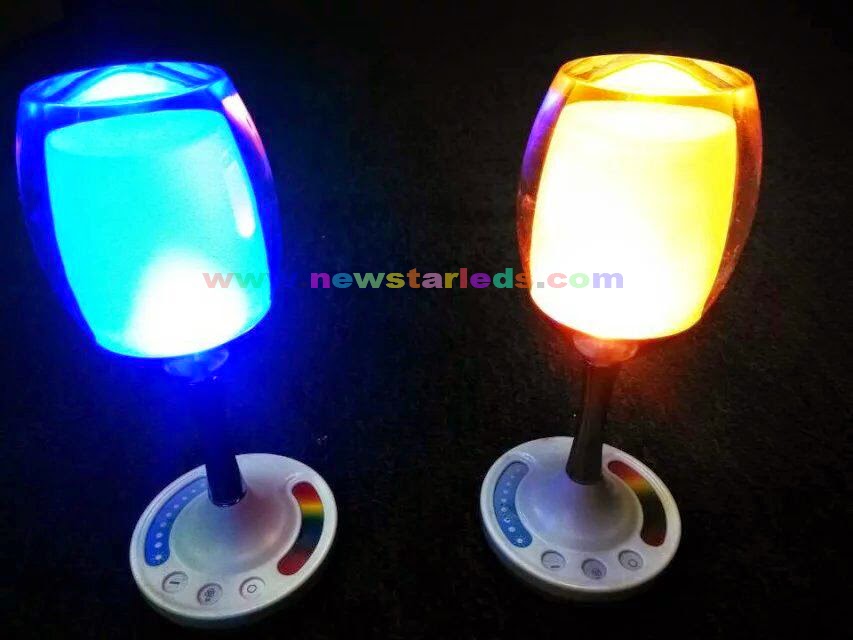 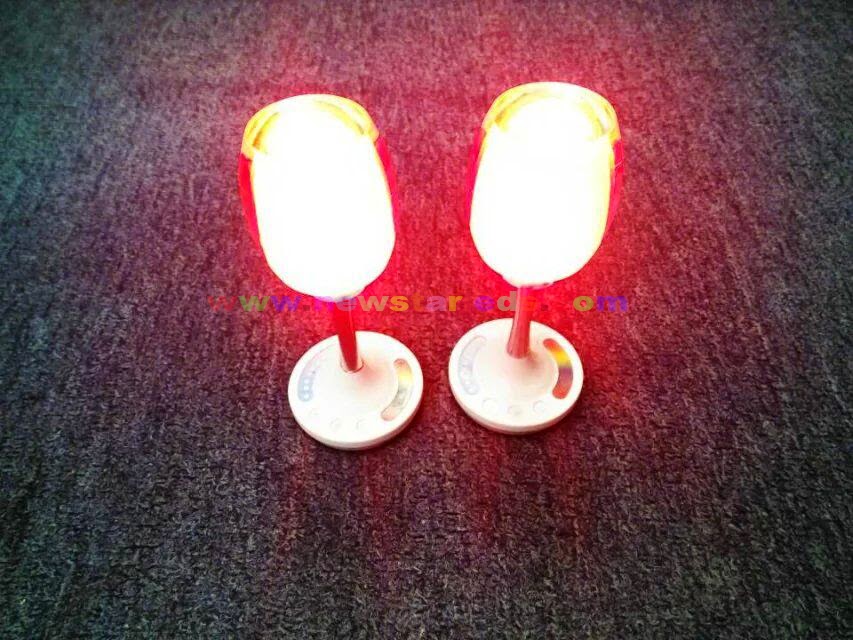 -7W RGBW LED Track Light
It is a high-performance Touch Screen Remote Control RGB LED Downlight,adopting the most advanced PWM control technology , owning 640 thousand colors and 20 automatical changing modes to choose.
Also, it has the memory function(that is to say, the previous settings will be resumed when power on again). It is widely used in KTV, bedroom, bar, etc.
With the technology of the 2.4G high frequency wireless remote control, it has the characteristics of low power consumption, long distance transmission, and strong anti-interference ability ,high speed telecommunications, etc.
The forging and stamping aluminum lamp body , to the maximum extent , successfully solves the heat sink trouble by air backflow with increasing more fins. Cover of led bulb is made of PC and nanometer coolant, light transmittance over 85%, light transmitting evenly. 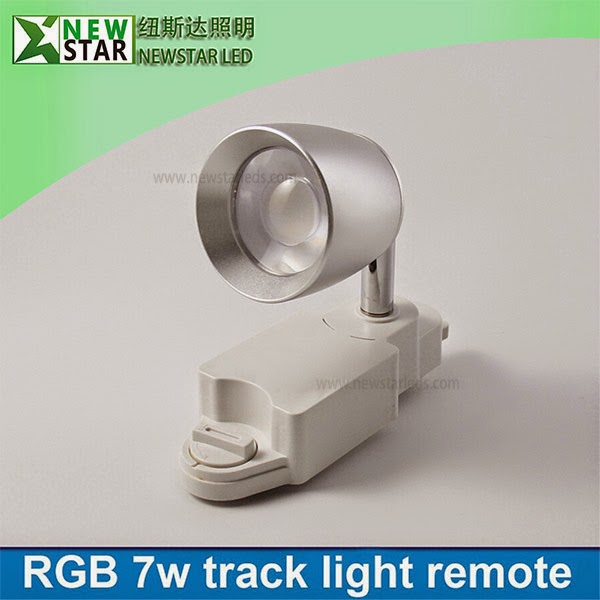 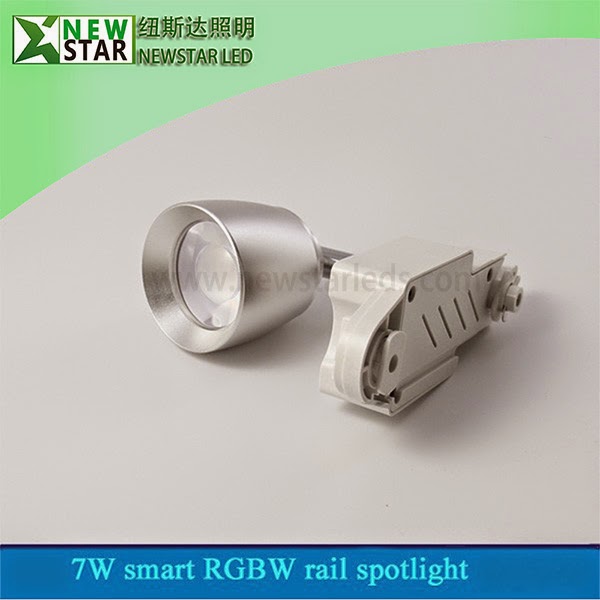 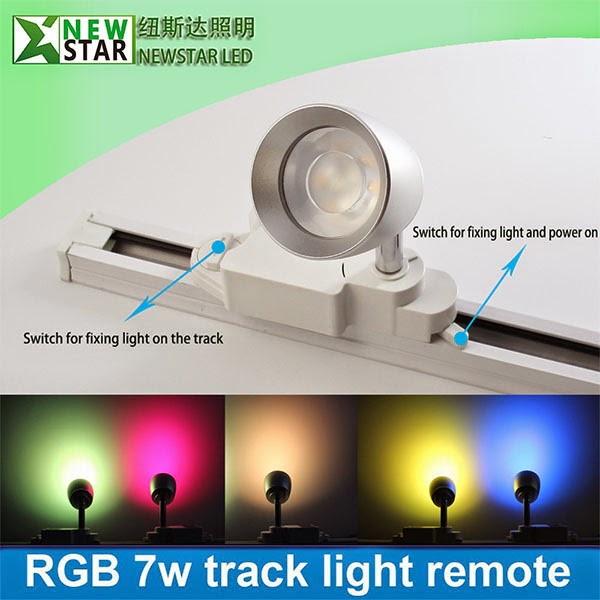 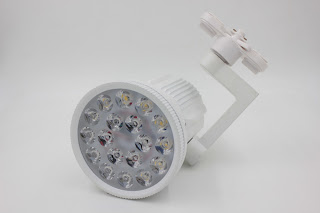 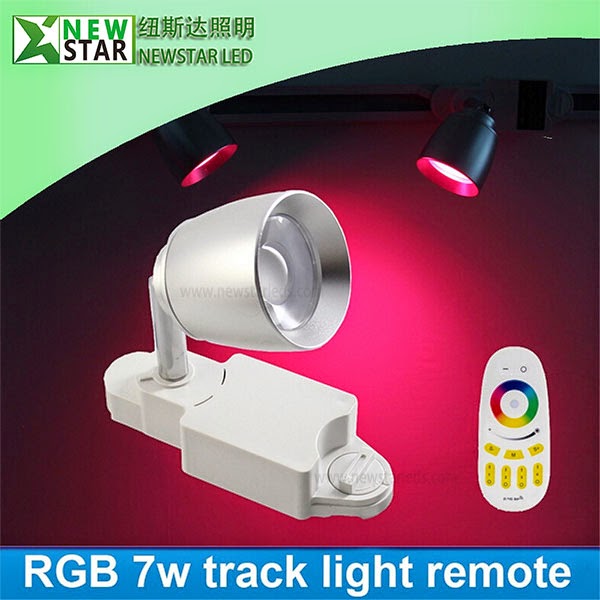 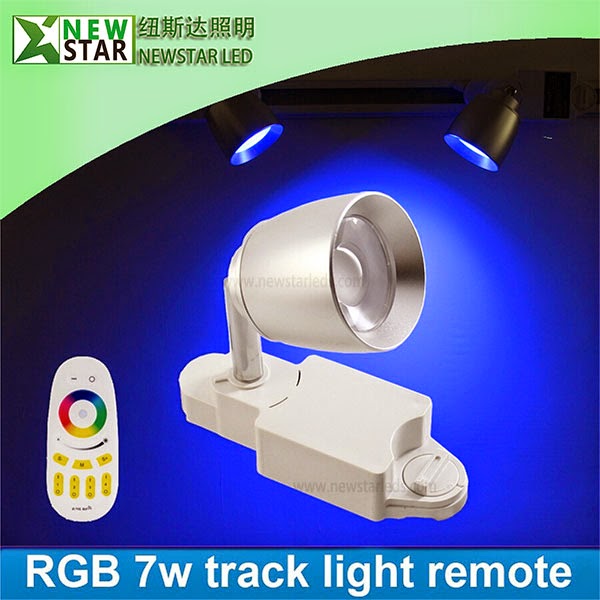 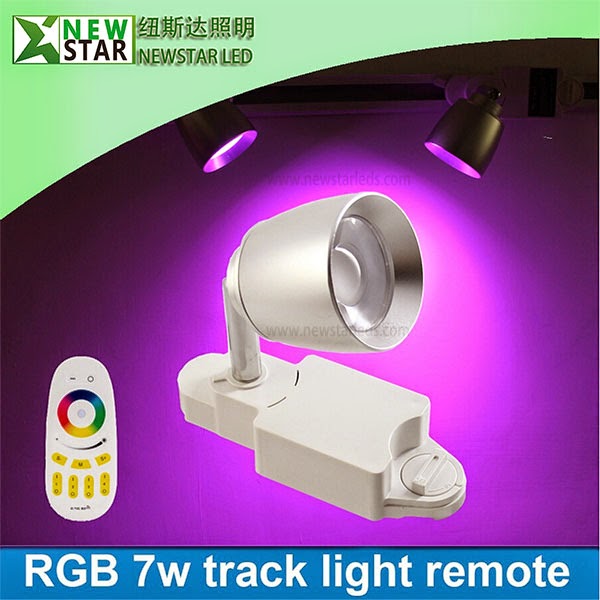 + Ideal eco-friendly and money saving replacement for traditional light bulbs and tubs
+ LED lights are perfect for as energy efficient lighting in your living areas and at home
+ Dimmed and colored LEDs for special lighting effects and warm lighting at home
Your Benefits When Buying from NEWSTAR LED
发帖者 Newstar 时间： 上午1:41 没有评论: